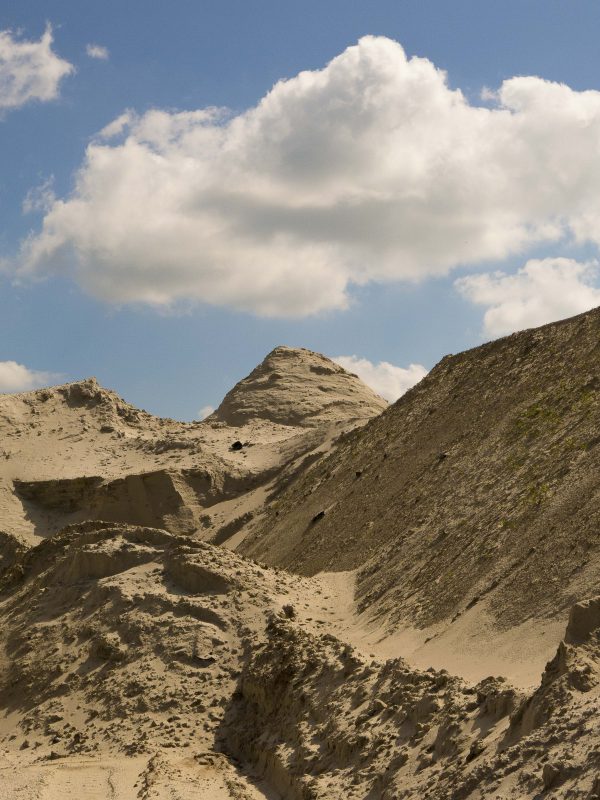 In the Atlantic period (8000 – 5000 B.C.) the territories of Friesland, Groningen and Drenthe still largely comprised of wetland. In this vast, soggy marshland, oxygen and bacteria were barely given the chance to consume the remains of dead plants. Over thousands of years, layers of metres-deep peat were created from the dead plant material, a fossil fuel source that brought the villages in these peatlands, including Beetsterzwaag, as much prosperity as it did poverty.

The cutting of peat has left deep traces in the landscape: turftrekken, petgaten (ditches) and drying fields. Small-scale manual labour developed into large-scale industrial exploitation in the 19th century. ‘Baggerbeugels’, ‘veenstikkers’ and ‘baggelmachines’ are words that have long since disappeared from the Dutch language, yet the traces of these tools are still very much visible in the Dutch landscape.

The Dutch artist Josje Hattink (1990, Amstelveen) has been studying the geographical and cultural history of the peatlands around Beetsterzwaag for well over a year. For SYB, she has compiled a diverse public programme with screenings, artists’ discussions, workshops and an excursion about peat, turf and the bogs.

The programme precedes a six-week residency period in Kunsthuis SYB. During her stay, Josje Hattink will research the extent to which the residents of Beetsterzwaag and its surroundings still feel connected to the peat (or ‘drach’ in old Frisian), the material that played such an important role in the lives of many of their ancestors. What do the peatlands mean to them now? At the same time, Hattink explores the sculptural quality of peat and the empty space it has left behind in the landscape, by making installations in and around the Kunsthuis using peat and turf. Hattink takes her inspiration for this from forms that typically pertain to peat extraction, such as turf banks and mounds, drying fields and petgaten. In her research, she is collaborating with Theun de Leeuw, the last commercial peat digger in the Netherlands, and Theo Spek, a university lecturer in landscape history at the University of Groningen.

Josje Hattink studied Fine Art at the Royal Academy of Art in The Hague. She has participated in various group exhibitions and residencies, including the Atelier Austmarka (Austmarka, Norway), De Satellietgroep, and was an artist in residence at ‘De Zandmotor’ in Villa Ockenburgh, Loosduinen. Josje Hattink’s work can be summarised as one simple question: if you dig a hole, will it automatically create a mountain? For Hattink, exploring materiality, volume and negative space is a way of understanding how the world around us is constructed and how it functions.

In the morning we will show the award-winning 16mm film “Flow Country” (2017) by Jasper Coppes, followed by a question and answer session with the artist. In the film, Jasper Coppes leads the viewer into an extraordinary exploration of Scotland’s peatlands. After lunch, Theo Spek (university lecturer in landscape history at the University of Groningen) and the Netherlands’ last peat digger Theun de Leeuw, will literally guide us through the mud in search of traces of the peatlands’ past in Beetsterzwaag (De Deelen nature reserve).

The history of Nij Beets and Beetsterzwaag can be read as a Tale of Two Cities: one is poor, the other rich; one is wet, the other dry; one is built on mud, the other on sand. What connected both villages in the past was peat: the peat workers lived in Nij Beets, often in wretched conditions, while the land owners lived in Beetsterzwaag in beautiful, stately townhouses.

During this series of two workshops, the residents of both villages will be reminded of their shared past. This will initiate a dialogue about the way in which this period has been passed down and which traces this has left in the two villages, now indistinguishable in terms of wealth.