translation: Pieter de Bruyn Kops ‘The landscape painter uses the figures of men to mark a road. He would not make that use of my figure. I walk out into a nature such as the old prophets and poets Menu, Moses, Homer, Chaucer, walked in.’ – Henry David Thoreau, Walking (1862). ‘Walking’ is Thoreau’s glorification […]

In the project ‘Une condition naturelle’, Arjen de Leeuw and Walter van Broekhuizen come into the possession of the wilderness. In their work, both artists are enthralled by the role of nature in the everyday city life. The city, that with its bricked houses and citizenship has overgrown nature since the nineteenth century, is central […]

translation: Pieter de Bruyn Kops “Exaggerated friendship Adventure How men tell it Heroin Survive, energy, swap Tested to its very limits Fill your volume with air Further” The weblog of the Israeli, Noa Giniger (1977), is filled with a seemingly random selection of words, pictures, film clips and videos. Only the titles of the material […]

In SYB, Noa Giniger turns the intimate creative process inside out and opens her studio doors. During her residency, she will invite six artist friends to each share with her a week in her ‘Zimmer’, or holiday home. With this Giniger bridges the physical distance that normally separates them. The artists have slowly become part […]

If your visual field would actually be a kind of space, then what would this space look like? Mathilde van Beekhuizen will create different kinds of spaces for the visual field in the display window of SYB in the coming weeks; miniatures consisting of walls and a ceiling. The viewer can view every space, just […]

Jetske Verhoeven (Nijmegen, 1980) was awarded for the fifth Sybren Hellinga Kunstprijs. Especially her film “J’attends la guerre” (waiting for the war) was well-received by the jury, and “has a great personal and strong presence and ingenuity, also in the use of languages. Through this, she creates a productive tension between what is being made […]

OUR HOUSE IN THE MIDDLE OF THE STREET

On October 23rd, 2010, Kunsthuis SYB celebrates its 10th anniversary with a symposium and a party. The symposium ‘Our House in the Middle of the Street’ concentrates on subjects that were brought up by the diverse projects that took place in SYB since the start of the residency, formulated along the lines of the various […]

The Object Lag, Cross-Reference looks into the practice of writing and use of theory as an integral part of work by artists and designers. Cross-Reference aims to explore potential ‘readings’ of essays, texts and approaches in writing by experimenting with possible forms of presentation, that aim to stretch further than a linear reading of text […]

Together with inhabitants of Beetsterzwaag, Laurence Aëgerter and Ronald van Tienhoven work on a reconstruction of a series of photos from the fifties of the French cultural anthropologist Claude Lévi-Strauss in the next few weeks. The photos appeared as a supplement of the book Tristes Tropiques (1955), by Susan Sontag considered as one of the […] 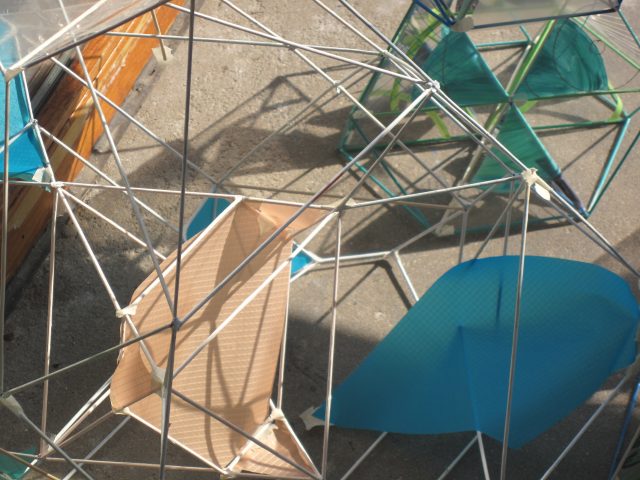 Usually, Erica van Loon works in her studio on artificial landscapes in set-like constructions. She alternates building, painting and photographing, using wooden constructions and transparent plastic, whether painted or not. The alienating new landscape that comes into existence in this way is often shown by Van Loon as pictures in light boxes. Recently, Van […]

5th Sybren Hellinga Art Prize 2010 Call to visual artists who graduated in May 2005 or later DEADLINE ENTRY Tuesday 13 July 2010 For the fifth time the Sybren Hellinga Stichting distributes her incentive prize for young artists. Artists who are residential in The Netherlands and who have graduated from an undergraduate art degree after […]

Visual artists Sybren Renema and Timmy van Zoelen will establish the The New Frisian Museum in SYB during the summer weeks: a mark of honour to the solitary individual in the cultural inheritance. According to the artists, collections in small regional museums, such as the Ruurd Wiersma Hûs and the catacombs in Wieuwerd, often appeal […]

“The unknown artist, his bad taste and the way he moves his famous body” Kunsthuis SYB invited Nina Wijnmaalen as a representative at De Kunstvlaai. The eighth Kunstvlaai will take place in and around the Westergasfabriek in Amsterdam, where 70 art stages, a great amount of master’s programmes and about 400 artists will present themselves. […]

A CERTAIN CAPACITY FOR OCCUPYING SPACE

Memory is not static, but is formed over and over again, according to the Finnish/Irish artist Deirdre M. Donoghue (1971). By expressing memories and sharing them with others they take a new shape. In A Certain Capacity for Occupying Space Donoghue works with memories of works of art, and tries to make these visible. Donoghue […]

The American performance- and video artist Nina Yuen will enter the new decade in Beetsterzwaag through a thorough analysis of the morning ritual. First, Yuen observes the morning habits of friends and strangers in great detail, such as waking, brushing teeth, stretching and breakfast. Then she attempts to reenact these actions in her own decors, […]

The “smartlap’’ (sing along song) is a message of hope, desire, unrequited love and loss, packaged in a universal language that everyone understands. The meaningless emptiness, as a result of this universal language, is often accompanied by a beautiful landscape, folklore, flapping flags, a person stood in front of a backdrop facing the camera, a […]

The Polish artist Mariusz Tarkawian always carries pen and paper. He notes down life around him in an endless stream of intricate little sketches called Peeped Drawings.  During conversations with friends and appointments with gallery owners he sketches away relentlessly, also recording fragments of dialogues. His report in drawing, reads as a succession of awkward […]

In ongoing pursuit of young talent SYB goes to the extreme. A younger art duo than this one is hard to come by, a much better one, as it goes, as well, because these two represent the absolute top. In the summer weeks Herman Knottnerus en Pikachu will reside in SYB. A collaboration that started […]