THE REGISTRY OF PSEUDONYMS “I recently received the news that Mr John Ravenswood, who lived on the island of Quelpart, had passed away,” writes J.J. Slauerhoff in the preface of Ravenswood’s collection of poems East Asia. The author, Slauerhoff continues, deserted a whaling ship and ended up on an island in the Strait of Korea. Afraid people would discover where he lived, he entrusted his poems to Slauerhoff, who eventually published them post-mortem under the name John Ravenswood. Of course, nobody believed this story. It was clear from the start that John Ravenswood never existed; it is J.J. Slauerhoff’s pseudonym. But why Slauerhoff wrote under this pseudonym and why he chose this particular pseudonym remains unclear.

Actors, artists, criminals, journalists, popes, mathematicians, philosophers, leaders, historians, dancers, queens, prisoners, etcetera: they all employ pseudonyms. Many of them have now been included in the Registry of Pseudonyms. This online register was started by Riet Wijnen during her first residency in SYB in 2013, and has since expanded to an impressive array of aliases, alter egos, code names, nicknames and other pseudonyms at http://registryofpseudonyms.com. 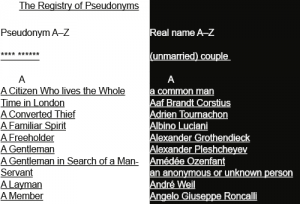 Time to stop and reflect. Kunsthuis SYB offers Riet Wijnen an opportunity to deepen her research on the pseudonym phenomenon between 19 December and 30 January in Beetsterzwaag, where Slauerhoff once resided and worked as general practitioner for a total of 36 days. The research is a first exploratory phase in the production of a reader on the pseudonym phenomenon. During her residency, Riet Wijnen will look for the common denominators in the Registry of Pseudonyms. She will then enter a dialogue with authors and scientist to look for an appropriate form and content of the reader.

Riet Wijnen (1988) lives and works in Amsterdam. She obtained her Master at the Sandberg Institute and has exhibited both locally and abroad. In 2013, she won the sixth Sybren Hellinga art award. Besides her work as a visual artist, she is involved with Kunstverein (Amsterdam) as Associated Curator. Together with Kunstverein Publications she publishes books and periodicals, such as Marlow Moss (2013), an alternative bibliography on a British constructivist, and Abstraction-Création: Art-Non Figuratif (2014), a reprint and translation of the five cahiers of the French collective Abstraction-Création between 1923 and 1936. http://www.rietwijnen.nl