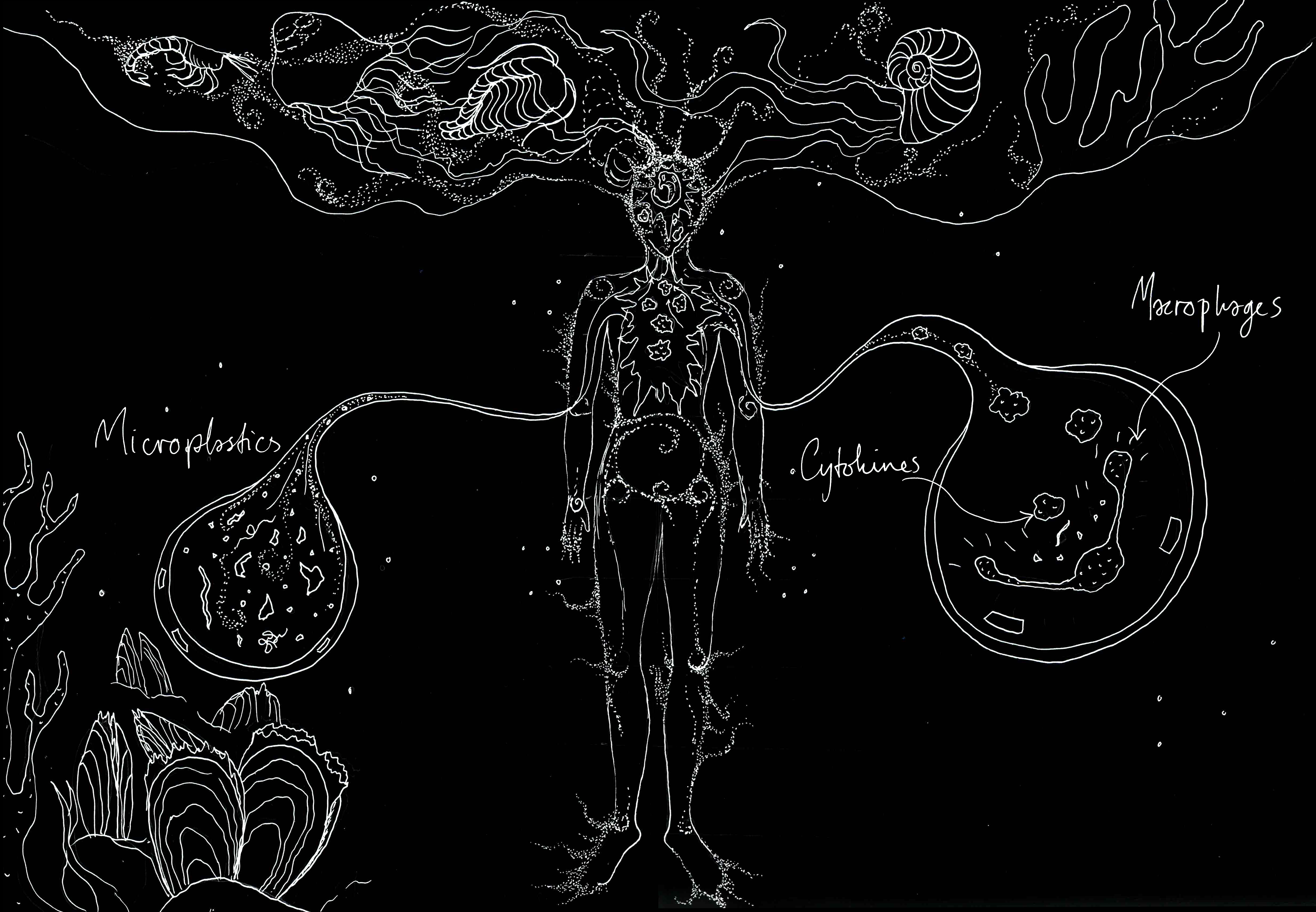 While most people are aware that plastic is polluting the oceans and food chains worldwide, impacting the health of marine organisms, who really thinks about the possibility that humans are among the most highly plastic-exposed species?

Our current resident at SYB is Danish artist Sissel Marie Tonn. In her practice, Sissel explores the complex ways humans perceive, act upon and are entangled with their environments. Her work always returns to the question at the core of ecological thought: Where do we perceive our bodies to end, and the environment to begin? At SYB, Sissel will be working on “Becoming a Sentinel Species”. This project, which she is making in collaboration with Heather Leslie (Dept. of Environment and Health, VU Amsterdam) and Juan Garcia Vallejo (Dept. of Environment and Health, VU Amsterdam), combines scientific research with a speculative artistic strategy, to create a new narrative on humans as sentinel species who are exposed to microplastics. The project won this year’s BAD award (Bio Art and Design Award). Together with her team of scientists and dancers/choreographers, Sissel will be realizing this project between August and December. On the 13th of September 2020, Sissel will be presenting this work-in-progress in a closing event at Kunsthuis SYB. The final installation will be exhibited at MU, Eindhoven on the 11th of December 2020, together with the other BAD award winners.

The project
“Becoming a Sentinel Species” explores the issue of microplastics by reframing the concept of ‘sentinel species’ (commonly understood as organisms, often animals, used to detect risks to humans by providing advance warning of a danger). An imagined team of researchers take on the task of becoming a sentinel species themselves by exploring the sensitivity of their own bodies to the exposure to microplastics.

Since life evolved in water the hydrophobic portions of cells are hidden within membranes. Immune cells have evolved to sound the alarm when they encounter hydrophobicity in the body. As plastic is highly hydrophobic, they may induce the same alarm response. Developing an experimental method to aggravate their own immune cells with microplastic particles, researchers harvest the chemical signals of the cells – the cytokines. The re-ingestion of the cytokines then evokes hallucinations of returning our shared origins in the primordial sea.

Sissel Marie Tonn’s work will unfold as a video piece that follows the sentinels-to-be as they explore these latent immunological and hallucinatory reactions to the hydrophobic microplastics. These laboratory explorations will take place at the Department of Immunology and the Department of Environment and Health at the VU (Amsterdam) with the use of a series of imaginary wearables developed by Sissel for incubating macrophages (the ‘dirt-eating cells’ of our immune system) derived from the artist’s blood. Sketches, parts of the wearables and preparations for the video will be shown at SYB during the final presentation on the 13th of September. Until then, Sissel will be opening the doors to her work space on weekends, from 1 – 5pm, starting from the 29th of August.

Sissel Marie Tonn is a Danish artist based in The Hague, The Netherlands. Sissel has a bachelor in Film and Media studies from University of Copenhagen. She completed a master in Artistic Research at the Royal Academy of Art in The Hague in 2015. In 2016 she was the recipient of the Theodora Niemeijer prize for emerging female artists, resulting in her first solo show at the Eye in Van Abbemuseum, Eindhoven. She was a resident at the Jan van Eyck Academie in Maastricht in 2017 – 2018. In 2019 she received the talent development grant from Stimuleringsfonds NL. Her work is frequently exhibited in The Netherlands and internationally, most recently in Istanbul Design Biennial (2018), Ballroom Marfa (2018) and Kikk Festival in Namur (2019).