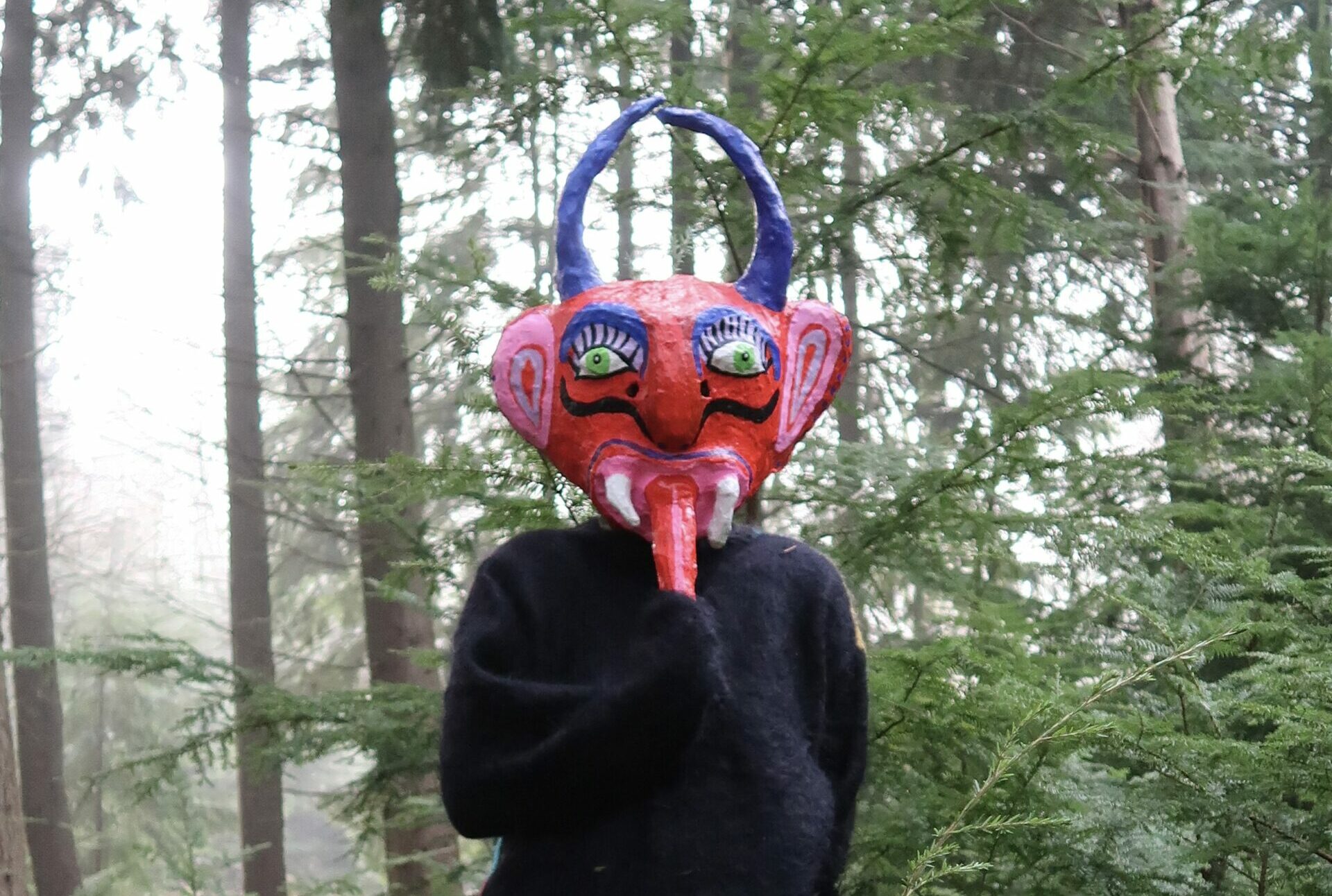 The essay is the result of conversations between the two of them and is inspired by Vanessa’s own fascination and research as a PhD candidate in the Department of Art History and Material Culture (University of Groningen). Her research is part of the NWO-project Curious Hands. Moving Making to the Core of Education and focuses on the way in which making is learned and taught in educational workshops.

A beautifully designed copy, made by Sverre van der Velde (design student Minerva Art Academy), is available at Kunsthuis SYB as soon as we are open again!

Just before Faust meets the devil Mephisto for the first time in Johann Wolfgang von Goethe’s famous tragedy, Faust questions whether actually in “the beginning was the Word,” as stated in the Bible. After writing off “Spirit” and “Force” as alternatives, Faust comes to the conclusion: In the beginning was the deed! This also applies to Carmen Schabracq, who began her residency at Kunsthuis SYB by painting a snake. A representation based on that of a decorated tile, located in the old part of the building. Few tiles have been preserved and the snake tile is the only one that depicts an animal, something that immediately appealed to Carmen. The snake is depicted next to a tree, which evoked associations with paradise and the expulsion of Adam and Eve, and made her think of historical representations of paradise, where the snake has a woman’s head. 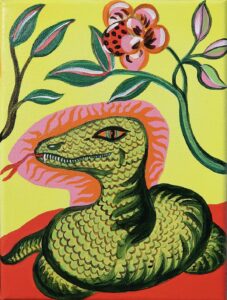 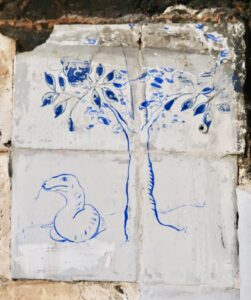 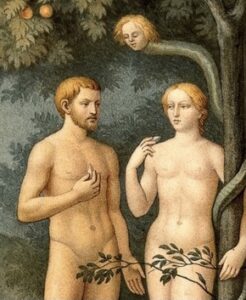 Temptation of Adam and Eve (ca. 1425) by Masolino da Panicale

By painting this work almost immediately at the beginning of her residency, Carmen was able to explore the environment while making, to establish a relationship with the space and to start researching grotesques (grottesco). An exuberant and imaginative ornamental form, which is often symmetrical, layered, intertwined, whimsical, bizarre, monstrous, as well as caricatural and laughable. Because masks are an integral motif of this ornamental form, it ties in seamlessly with Carmen’s ongoing research into masquerade, and specifically the devil. Exploring the grotesque style as well as prepping the canvases with black matte gesso led Carmen to a new way of painting. The resulting devilish mask paintings are not built from layers of paint covering the entire canvas – as Carmen usually does -, but rather were set up quickly not covering everything completely. The black primer is visible, and the masks almost seem to emerge from the darkness. The knowledge of her hands, how to move the brush to create varying lines, enables Carmen to experiment with this style of painting that is unknown to her.

In addition to two-dimensional representations, she makes three-dimensional masks from papier-mâché and textiles. During the residency at SYB, Carmen explored an additional material and technique; willow basketry. In learning this craft, she could not rely on the knowledge of her hands, but on the guidance of the experienced weaver Jannie Hakman. Learning involved a lot: in addition to preparing the willow branches (soaking in water), working the branches (basketry techniques), and using tools, time also plays an important role. Making a basket or decorative wickerwork, such as a mask, should be completed while the willow twigs are still moist. Carmen has taken on the challenge of learning a craft at an accelerated pace and mastering it in such a way that she is able to create masks with the learned techniques. The craft of basketry is somehow connected to her research into grotesques, not only in the finished masks but also in the symmetry and the interwoven layering of both the ornamental form and the willow weaving. In addition, Carmen has encountered a remarkable visual connection between the willow branches and the grotesques in the local environment: early twentieth-century Frisian gravestones are sometimes decorated with symmetrical willow branches. 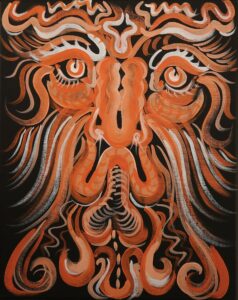 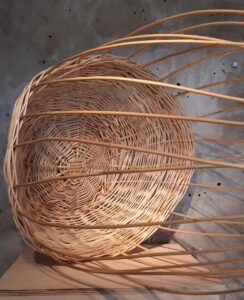 Experimenting with an unfamiliar way of painting, learning a craft, and conducting visual research into grotesques go hand in hand with thematic and conceptual research into masks, the devil, local stories and archetypes (for example, the basket as an archetypical object). Studying literature and speaking to people, in other words doing more theoretical and rational research, requires a different attitude and approach than practical research. Much like Mephisto’s metamorphoses in Faust— from black poodle to traveling student–, Carmen is researching from different perspectives. And yet making with the hands and thinking with the head influence each other. They are inseparable; they are one, just as the poodle and the student are also both the devil Mephisto.

Painting the snake was initially a way to start the residency, later Carmen gives it meaning by making connections to the thematic research. People use masks that depict animals and regularly assign human characteristics to animals in stories.

It is striking that in historical depictions of Adam and Eve, the snake has a human (female) head, in this way the masquerade is reversed: the animal disguises itself as a human. Often the serpent’s female head resembles Eve’s face and it seems as if Eve is looking in the mirror. Perhaps the evil is within herself? ‘Be careful when you look in the mirror because maybe the devil is behind it!’ (Nie in de spiegel kieken, anders krieg j’n klap van joosje pek). In this Zeeland saying Carmen found a connection between the devil and the mirror which also led her to the question: Is there evil in ourselves? What do you see when you look in the ‘horned’ mirror?

Animals such as the snake, but also the goat are often associated with evil. The goat is considered the antecedent of the devil; think, of Pan, for example, the Greek god of nature who has the head (including horns) and legs of a goat and the upper body of a human being. Carmen is fascinated by these pre-Christian depictions of a devil figure, because it is a less moralistic and ‘evil’ interpretation and shows also the humorous and playful side.  Like the unexpected, unpredictable behavior – jumping like a buck. In her research on the devil in Frisian folktales, she repeatedly came across devil banners, or in Frisian duvelbanners. Duvelbanners were often farmers who looked beyond what can be rationally explained and were therefore considered a kind of magician. They were called in during illness to drive out the evil spirits. Within masquerade rituals devil masks are used to chase away the evil spirits scaring them off with their own image. This aspect of fighting fire with fire intrigues Carmen, because once again it highlights the comic side of fighting evil. The painting Boogie Man embodies this playful side of the devil and brings together the symmetry of the willow branches and the open way of painting, first applied for the grotesques. Boo! 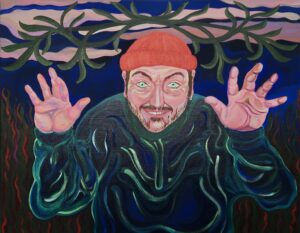 Carmen‘s originally intuitive choice for a black matte primer for the paintings, working from the dark rather than the light, also ties in with her thematic research. Local folk tales of the devil and the dispelling of evil spirits are inextricably linked to this time of the year – the winter months – and the fear that the light would not return. In addition to scaring the devil with masquerades, making noise is also an important means of chasing away evil spirits. Sint-Thomasluiden, formerly called Divel-Jeije in Frisian (chasing away devils), is a tradition that takes place annually on the shortest day of the year, December 21. Originally, the bells were rung continuously through December 31 to chase away the spirits that shorten the days and prevent the return of light. This tradition is honored mainly in Southeast Friesland, for example in Katlijk. There, from December 21 to 31, anyone may ring the bell of the free-standing belfry between 7:00 and 22:00 and thereby contribute to chasing away the evil spirits.

Carmen Schabracq strives to breathe new life into these kinds of local stories, because she wants to show the rich imagination and ingenious and whimsical images and stories that accompany people’s dealing with deep-seated feelings, such as the fear of the dark, evil and death.