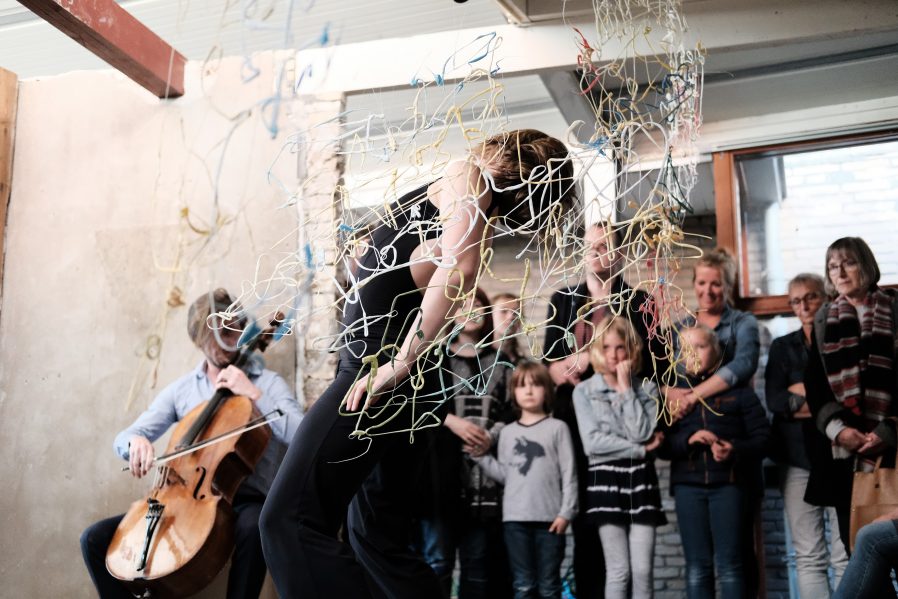 A man sits next to a sculpture. He’s playing the cello. It’s Saturday afternoon and visitors of the exhibition The City as Canvas uncomfortably form a circle around the man and the sculpture. A female dancer appears from the stairwell. She links the visitors together one by one, placing hesitant hands on strange shoulders. The wobbly circle looks on at how the dancer moves according to the pattern of the plastic sculpture: a pattern made by a machine that solidifies movements. I’m also standing in the circle, with my neighbour’s fingers trembling in my raised hand. My hand becomes sticky and I wonder how long I can keep standing still.

During her residency in Kunsthuis SYB, architect-artist Tiwánee van der Horst developed a 3D painting machine. This machine makes sculptures – and potentially buildings in the long term – of recycled plastic. Stemming from her desire for a return to a more intuitive thinking and making process in the buildings around us, Van der Horst conceived a 3D printer that allows itself to be commanded by the free movements of an arm in the air. At a time in which the human body gradually appears to become redundant – an artificial womb makes the news while I’m writing this – Van der Horst questions the digitalised architectural drawings of her colleagues.

‘I want to be able to touch the lines drawn, something you can’t do with a digital file,’ says Van der Horst. She continues: ‘A 3D printer follows a digital model and carefully prints out the objects in layers. I want to use the fluid character of molten plastic, a quality that we can comparable with paint.’ Inspired by the movements of painters (the wild gestures of action painters or the detailed work of pointillists), Van der Horst blurs the boundaries between architectural drawing and painting, and in doing so shows the significance of physical actions. Her machine leaves room for both experiment and failure. The user enters into an interaction with the material and must accept the outcome: a line can’t simply be digitally erased like in a computer drawing, but forms a physical object.

It makes me think of a black and white photograph from the series Inhabited Drawing (1975) by Helena Almeida. The photograph shows the artist drawing a line in the air using a pen. My eyes follow the line, which under the influence of gravity falls down out of Almeida’s pen. The endpoint of the line, the point where Almeida started her pen mark, floats in space, solidified. Both Almeida and Van der Horst attempt to transcend the boundaries of the picture plane. Forty years after Almeida’s photograph, the threads float not only on the image, but also three-dimensionally through the sky.

Van der Horst talks about the solidifying process: ‘different types of plastic have different solidification times. Polycarbonate solidifies quickly, when it comes out of the machine it immediately feels like clay. Bioplastic solidifies slowly, coming out of the machine like honey, resulting in a more dripping outcome.’

The solidifications in the exhibition are reminiscent of the lines created by a moving lamp in a photograph with a slow shutter speed. By following the dynamic of the sculpture, the dancer imitates a memory of the earlier movement, which Van der Horst made with her machine. Van der Horst’s desire to realise architecture in this way would mean that we could be living in buildings of remembered movements. However, this requires research: imagined projects for the near future are a bus shelter or a climbing frame – in which a child climbs through remembered movements.

In order to arrive at strong structures for the plastic threads, Van der Horst looks at weaving and folding techniques. In doing so, she makes an analogy with traditional crafts, a parallel that Marcel Wanders also made with his approach to carbon-fibre as though it were textile, to realise his hand-knotted Knotted Chair (1996).

The fluid forms in SYB are paradoxical to a time in which tables were made out of stone and unmistakably represented a ‘table’. Instead of talking about ‘windows’ and ‘walls’, Van der Horst prefers to research elements on the basis of qualities; working on windows and walls that flow into one another. What would emerge, for instance, if a non-transparent window and a transparent wall blend? With her work, Tiwánee van der Horst opens up a world in which categorisation becomes fluid and meaning is assigned on the basis of material study. This ‘lagoon’ creates room for experiment, but also raises questions for the future. Functionality seems to be a pillar in Van der Horst’s future plans. Do the sculptures in SYB require this rooting in functionality to exist as sculptures? Or can they stand alone?

I’m also curious about how Van der Horst will continue with her language musings: perhaps the future ‘bus shelter’ will be given another name? Or perhaps a dichotomy will arise at a certain point in Van der Horst’s work, whereby the ‘bus shelter’ and the ‘sculptures’ will belong to two different worlds? This future is still fluid.