Elements of an apocalypse or evolution 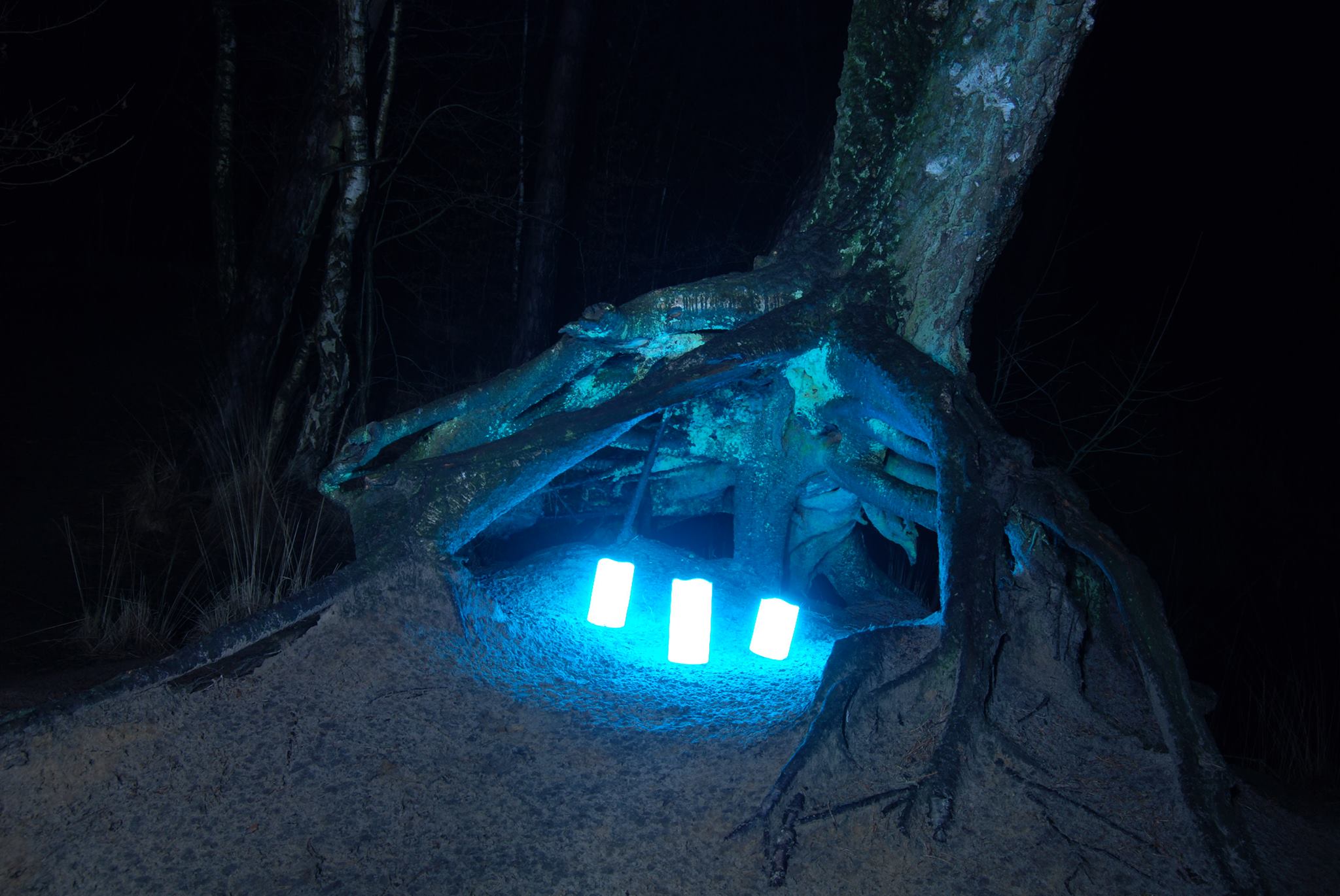 On Sunday the 19th of February, Müge Yilmaz (1985, Istanbul) leads us, a group mostly consisting of Frisians and Randstad residents, to the woods of Beetsterzwaag. It’s dark and muddy.

The month-and-a-half of Yilmaz’s residency has come to an end. She has mainly used this period to delve into the performance we are soon to experience in the dark. A performance in which she makes use of what are known as ghillie suits: camouflage costumes worn by hunters to fully immerse themselves in the landscape from top to toe. Yilmaz was already using these disguising and alienating suits in 2016, in the work The Water, the Soil, the Jungle: a ‘family portrait’ depicting three woolly creatures somewhere between people, animals and plants.

Before we head into the woods, I investigate the traces Yilmaz has left on the walls in SYB: groups of different types of moss which smell like beer and buttermilk. On view, among other things, are four creatures that already somewhat refer to ‘human-plant-animals’. Also depicted is a triangle, the tip of which points downwards. The images evoke a mysterious atmosphere. Yilmaz explains: ‘Someone once described my work as follows: while reading a science fiction novel, you form the images in your head. Your work are the images with which you try to construct the story.’

Twilight is setting in outside, and Yilmaz hands out torches. We are herded through the backdoor and out into the woods. At Lauswolt golf course, rows of sawn-down trees are softly lit by low-lying lamps in the grass. Shiny cars are lined up – I imagine they’re probably gorging on lobster in there, or carrot cream with poached quail eggs. We pass hedges of rhododendrons, and gradually leave the illuminated world behind. Yilmaz instructs us to turn the torches on.

At a low-hanging branch we’re warned by two reflective marks, lit up like cat’s eyes. These marks recur throughout the rest of the walk: subtle interventions which Yilmaz has applied to the trees in advance.

After the muddy and meandering tour – with slightly soggy shoes – we arrive at the Witte Meer (the White Lake). Torches off again, Yilmaz stands markedly still and remains silent. We follow her example, and aside from the quaking of a rattled duck, it is completely quiet. In anticipation, we shuffle a little across the small, open space. To the left of us is a large container that the ice-skating club uses to store its things until it freezes again, but which could just as easily serve another purpose: a shelter, a depot for provisions…

Then we begin to point, nudging one another – the woods are coming to life. Layers of undergrowth rise up. Gradually dislodging themselves from their environment, they surround us in silence. With slow movements, they shift through the group, towards the water, where two electric candles and a jerry can await. The items are picked up and included in the continuing parade. The creatures’ bodies speak a language we have no access to. Almost as though in worship, they bow over the water, the trees, and each other.

Stealthily, they move towards the small sandbank and face a tree, the roots of which have grown above ground, creating a hollow. Herein, we see a collection of plastic bottles, the creatures once more bowing and stalking around it. Even a visitor’s dog, that was running around during the walk, has realised he is witnessing a special ritual and looks on in silence.

Have we just been given an insight into an apocalyptic scenario? And within this, I wonder, have we then evolved into beings who are more than homo consumericus, or is it perhaps the other way around: have we devolved into the hunter-gatherers of thousands of years ago? Yilmaz is happy to leave this hanging in the middle, just like the question of whether the elements she gives us sketch a dystopia or utopia. This is confirmed by the still life we encounter at the end of the tour, between the tree stumps and grass stalks. Yilmaz has applied a layer of glow-in-the-dark paint onto dozens of branches, bits of moss and plastic items, whereby the objects light up green. It creates a fairytale-esque yet also unsettling atmosphere: it almost looks like radioactive waste.

With elements from the Wallebos still resonating, Yilmaz leads us back into the village, where humans and animals are once again distinct from one another, and the presence of an acute apocalypse no longer appears to loom. All the while, her characters and objects morph into stories in our minds. The plots of which vary widely.