Enough Rumours to Swing A Cat 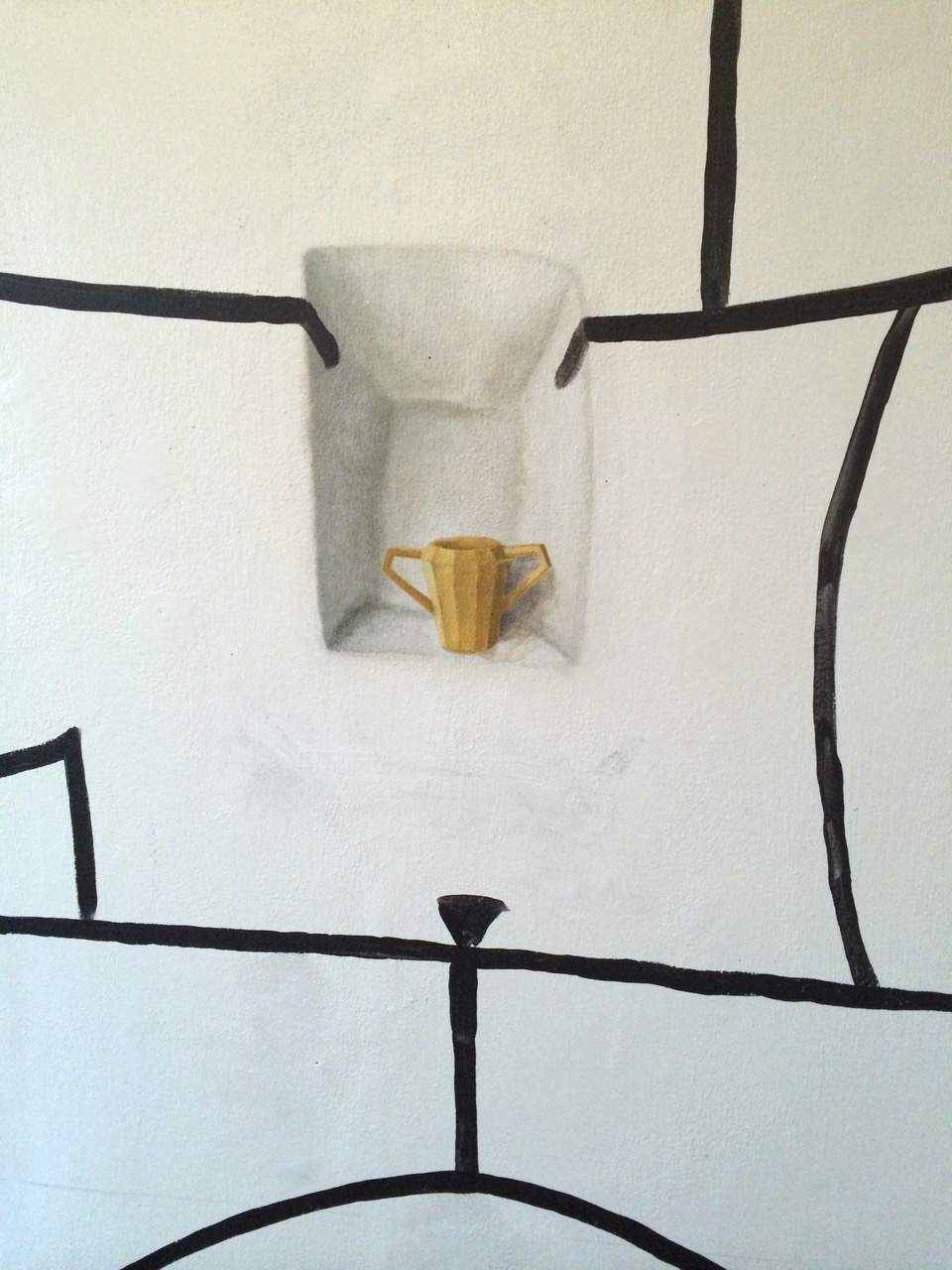 Alison Yip works primarily through painting, wall treatments and everyday materials, engaging various genres and styles of visual representation. She examines notions of containment and absorption as it is negotiated pictorially and as a subject matter in itself as a process that takes place cognitively, but also within such ‘containers’ as a painting or architecture. Figures she depicts are often dissolving or emerging from decorative elements, while a sense of ‘styling’ through specific palettes and methods of display refer to a domestic realm. Working directly on the wall creates frameworks for images and objects, highlighting relationships therein. These wall paintings act as membranes, drawing from various historical, quotidian and invented design languages, producing otherworldly atmospheres. Her last project, Gazebo, was a reflection on the historical transformations of the building that is now the Vancouver Art Gallery and an attempt to destabilize the authoritarian signs embodied by its Neoclassical architecture by transforming it into a decrepit gazebo. As a strategy to experiment with wall painting beyond art contexts, her and artist Agnes Scherer created an ongoing side project called Ok! Murals.

During her stay at Kunsthuis SYB, Yip will focus on the 300 year old structure of the house itself which has come to form an icon of the residency and through her own developed methods of wall painting and spatial interventions, writing and observation, she will reflect and interpret its various narratives. Since its construction, it has housed and been transformed by its successive tenants including trade workers, civil servants, and at one point, a veterinarian. Before being purchased by the municipality of Beetsterzwaag, the house was converted into a candy shop complete with a small-scale factory, the remnants of which still exist on the property. The most recent iteration of SYB, through a major renovation, resulted in an encasement of the original structure with a partial roof and glass walls on its North and East sides, creating a veritable vitrine. The original house becomes an artifact, both protected and put on display, creating a liminal space that implicates the artist.

The house is itself housed; an entity, shaped and reshaped over time; sitting as a face among faces on the tidy main street. As an initial gesture, Yip will accentuate this faciality by constructing a room-sized camera obscura facing the street as a way to materialize its gaze, that is what passes through its window-eyes. The street exterior will be interiorized appearing as a floating image projected in the front room. From the outside, a passer-by is titillated by a small opening, but upon peering in sees only darkness. Viewers are thus invited to step inside to become voyeurs of the street, heightening an awareness of their own passage. The camera obscura creates a permeable space that echoes the in between-ness that is experienced at the opposite end of the house.

As Yip begins to reckon with the entire space, drawing on the different languages of wall and interior decoration, she will visualize a rich inner life of the house that will transpire over its surfaces and walls. While the camera obscura creates a greeting space and point of contact with the neighborhood, the projected image will act as a catalyst for thinking about and utilizing projection and tracery as a tool for wall decoration. As she moves deeper into the house, transitioning into a more fantastic id-like realm, SYB’s imagined histories will begin to figure- a town gossip, a secret butterball recipe, a herniated disk. The house as a format naturally enables an unfolding of such narratives and modes. A recent visit to the Villa Santo Sospir, transformed by Jean Cocteau and Madeleine Castaing, provides a recent inspiration and example of how stories, memories and transgressions may be embodied by interior design. Yip wishes to respond to SYB in these and other more diverse ways including a programmed cinema, short stories, anthropomorphic designs, and hobby techniques, such as decoupage. The prospect of living inside a project is an exciting challenge and one that is sure to dissolve boundaries of work and life; a collaboration with the house itself.