THE WAXING AND WANING OF AN AMPUTATED LEAF 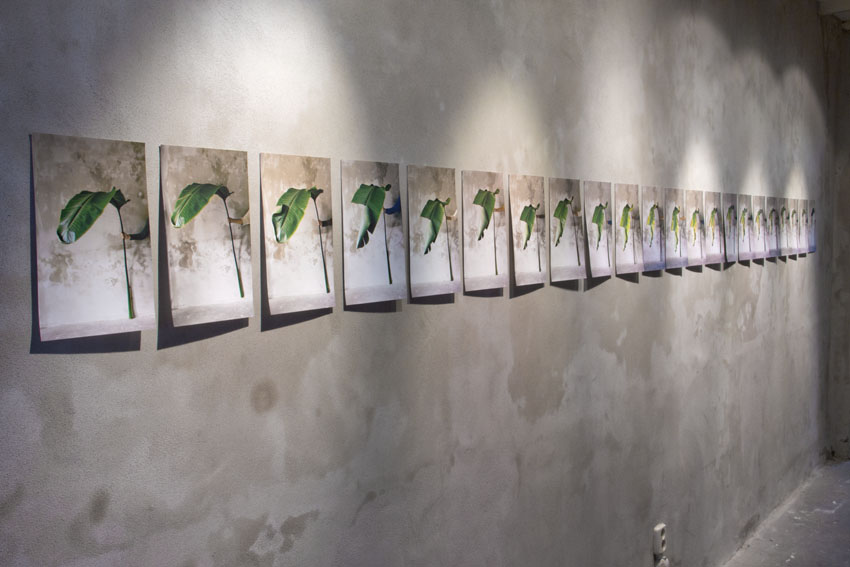 Each plant has its own sound. A leaf tears apart and rustles between your fingers: the soft cracking of its veins, alternated by the laceration of its fleshy cellulose, produces a characteristic, almost pleasant sound. The mutilation of plants comes natural to us. It is part of a process of construction through destruction that lies at the very basis of our civilization. In summer alone, it constantly moves through the air in the sound of many lawnmowers. But even fissures may sometimes break out of their comfort zones. Sara Bjarland and Alexandra Duvekot apprehended this when their residency at SYB took off with a forthright amputation. While visiting the Tropical Greenhouse in Beetsterzwaag, a volunteer forcefully tore a large leaf from a banana tree and presented it to Bjarland and Duvekot. This victim soon became resident, and a period of unprecedented terminal cohabitation commenced in SYB.

But does a plant, besides having its own sound, also possess a voice? Duvekot explored this question earlier in The Plant Orchestra: a sound installation in which she sang to a number of plants during a performance. Duvekot then translated the vibrations she exchanged with the plants into sounds that suggested a tentative conversation between human and plant. In SYB, Duvekot explains that her interest in plants started with this dream filled with singing grass. Ever since then she has been exploring the limits of identification with these silent cohabitants. This enquiry correlates with recent scientific research into the communicative skills of plants. In What a Plant Knows, Daniel Chamovitz writes about the “sight, smell, touch, hearing, memory and even awareness” of plants. Plants, it turns out, are constantly communicating: they respond to touch, they emanate all sorts of complex biochemical signals through the air and ground, they re-orientate themselves by way of light and gravity and are even able to ‘store’ information over several generations. Duvekot’s research  primarily focuses on an animation of plants. This animation is largely prompted by our own emotions and projections and therefore a particularly human concept of being. Plants have always played an important role in all kinds of conventional wisdoms and medicinal traditions, and we still tend to attribute mysterious powers to them. Nonetheless, in our daily lives plants are largely removed from our reality. Duvekot seizes the residency at SYB to stage true encounters with plants; beings which, according to her, we can only truly meet if we expand our consciousness substantially.

Bjarland’s interest in plants is on the contrary more outwardly focused. Her work positions itself in the twilight zone between the natural and the artificial: a domain that she often explores at the threshold of life and death. In earlier work she staged discarded house plants in front of her camera and reshaped plastic plants into substantial new forms. In SYB, she continues to look into that which is organic but appears to be artificial, and into that which is artificial but nonetheless looks alive. During the residency she collected both dead plant material as well as discarded mops. She then staged these objects in space with an almost animistic sensitivity. Bjarland’s work significantly questions the border between cultural objects and natural organisms. Her aesthetic portraits, hovering between object and subject, undermine the very theoretical foundations of our understanding of nature. We usually define nature rather easily in opposition to culture: as “everything that is not human or man-made.” In SYB, Bjarland gives us another definition of nature: as that which we cannot preserve or control. For Bjarland nature is  a system that forms itself, an independent power, but nonetheless one that we are largely dependent on. In our current engineered society we don’t care much for acknowledging this dependency. We have lost sight of the fact that we are actually ourselves part of nature. Instead we prefer to postpone a confrontation with this natural side for as long as possible: until we may find ourselves confronted with it in an absolute sense, in a moment between life and death.

Hence Duvekot and Bjarland both have their own reasons not to postpone essential encounters with nature. During their residencythey organised an expedition through the surrounding woods for local residents and other interested parties, led by the ecologist Frank van den Haak. Within the first few metres of their walk it became clear that the distinction between natural and cultural elements was fundamentally untenable. Van den Haak started to describe the nearby park as nature with a “cultural veneer” and the wilder woods of Beetsterzwaag showed us in particular, here in Duvekot’s words, that “nature in the Netherlands is completely cultivated, but grows into a natural woodland after all.” The group not only admired the many natural phenomena from a distance, but also quickly began to collect numerous edible organisms. According to Van den Haak a good understanding of nature benefits from some cultural destruction: “if you forbid people to pick mushrooms they will lose a certain tie with nature.” It turned out that an encounter with nature was mostly pursued in a practical animistic manner: that is in a constant tasting. It’s therefore not surprising that the walk concluded with a local natural meal, in which the picked mushrooms gave the most telling insight into nature in a final incorporation with our body.

It may come as no surprise that the majestic dying banana leaf, as a mediator between life and death, came to symbolize the entire residency period of Bjarland and Duvekot. It was also very present in the final presentation at SYB. It increasingly curled up and was lacerated in a series of photos documenting its transience. In another central installation pieces of dead nature, placed against a large green sheet of paper, were reanimated. An architectonic installation of branches was brought back to life by a ventilator in a rattling shadow play. The banana leaf moreover made its comeback in a short film in which, accompanied by solemn organ music, it travelled through the moderate woods of SYB. This exotic species from Beetsterzwaag made here its first, and also last, revered dance through local nature. The screening of the film was almost immediately followed up by a performance in which Bjarland, under the ethereal vocals of Duvekot, carried the leaf through the air for the last time. Following the leaf, a small procession retreated to SYB’s backyard where the banana leaf was returned to dust in a bespoken grave.

Like all plants, trees have no voice, but they disturbingly come to life when you fell them. Then they will let out a deafening cry between life and death. Bjarland and Duvekot illustrate in SYB that it’s above all a form of death and destruction that points to living presences. It is this tension between inanimate and animate, between object and subject, that is naturally played out in this residency. In this way the presentation in SYB also touches upon the much larger and urgent matter of how we understand nature in relation to ourselves. The work of Bjarland and Duvekot enforces, in very different ways, a similar insight. Both artists point to an intangibility of nature, to the insight – captured here in the words of Timothy Morton – that “Nature wavers in between the divine and the material. Far from being something ‘”natural” itself, nature hovers over things like a ghost. It slides from the infinite list of things that evoke it. Nature is thus not unlike “the subject” a being who searches through the entire universe for its reflection, only to find none.” By dramatically pointing out such a subjective nature, Duvekot and Bjarland forewarn us that we should take our silent cohabitants more seriously. Their attentiveness to plants contains a potential political consciousness: in which non-human entities may actually gain a voice. Bruno Latour outlines in his Politics of Nature how a stubborn fixation on humans as the only speaking subjects prevents us from entering a truly functional democracy. According to Latour “nonhumans deserve much better than to play indefinitely the rather unworthy, somewhat vulgar role of object on the great stage of nature.” Duvekot’s and Bjarland’s work in SYB contributes to the creation of a reality needed to think plants and humans, subjects and objects, together: to a world in which nature is not solely defined in opposition to our existence. A substantial consciousness of the plant world thus harbours the political promise of a world in which nonhumans are given a voice. We’ll probably never hear them sing, but let us at least be prepared to hear them out.