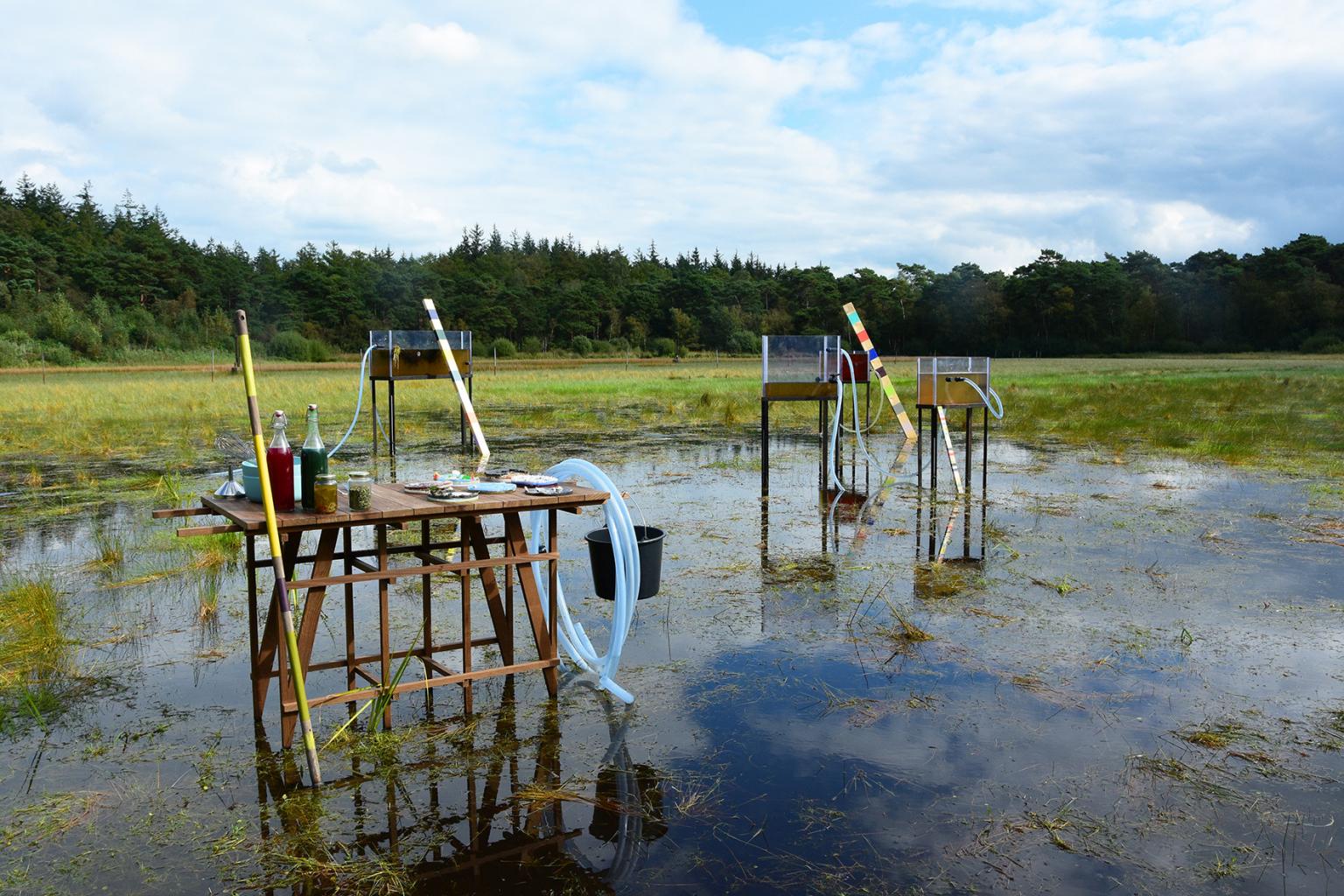 During Arcadia (May 7 to August 14, 2022), the entrance hall of the Fries Museum will be brought to life with a so called speculative installation titled SWIET – SWIT.

In late 2020 and early 2021, artist collective de Onkruidenier were in residence at Kunsthuis SYB and researched the presence of halotolerant life around Beetsterzwaag: life that has the ability to adapt to the presence of salt in the environment. De Onkruidenier conducted research on halotolerant life at various locations in the Netherlands. During Langstme, the third triennial of Beetsterzwaag, they gave an activating workshop at the White Lake. This research is continued with their installation in the Fries Museum.

SWIET – SWIT consists of two water tanks containing different plant varieties, all of which thrive in saline soil, or have adapted to it. They could potentially play a major role in the landscape of the future, which will become warmer, wetter and saltier. Sea levels and the temperature are rising due to the global climate changing at a significant rate. Plant species that normally subsist in the south may now also thrive in northern soils. The daylight entering through the museum’s windows is filtered by a cloud of colours. The colours affect plants in different ways: blue light promotes leaf growth and red light promotes flowering. With this, de Onkruidenier alludes to the optimisation of this effect as applied in greenhouse farming with LED lighting.

The shape of the tanks is based on the meadow bird area Skrins in Friesland, located in a reclaimed channel in the Middelzee estuary. Salt-loving plants (halophytes) such as saltmarsh grass, sea purslane and goldenrod are widespread in this area. The polder is considered a failure because the soil has remained partially wet; humans have not succeeded in completely controlling the sea here. De Onkruidenier therefore views this landscape as having enormous potential for the future.

SWIET – SWIT is a collaboration between Kunsthuis SYB, Fries Museum and de Onkruidenier and will grow during the 100-day arts and community triennial Arcadia.

Background
SWIET – SWIT is the Frisian part of SWEET – SWEAT (since 2015), a long-running artistic study by de Onkruidenier into the infinite connection between sweet and saline in our bodies and in the landscape. With rising sea levels and falling soil, Onkruidenier asks how you, as a human being, can relate to this. While in the Netherlands we continuously control the water with floodgates, dams and dikes and systematically monitor the water level, the Onkruidenier proposes a different perspective: what happens when we, as humans, adapt to a changing landscape that is becoming increasingly wet and saline?

The project ties in with the Fries Museum’s exhibition Á la campagne. While Á la campagne focuses on landscapes from the perspective of French light and color, de Onkruidenier’s installation shows the role that light and color can play in the cultivation of crops. Several activities will take place at the Fries Museum around this independent installation and presentation.

About Arcadia
The organization of Leeuwarden-Fryslân 2018 (the European Capital of Culture in 2018) is presenting the first edition of the triennial Arcadia in 2022. This follow-up to LF2018 consists of a 100-day cultural program, with which the organization draws attention to the future of mienskip (society), landscape and heritage. Arcadia 2022 runs from 6 May to 14 August 2022.