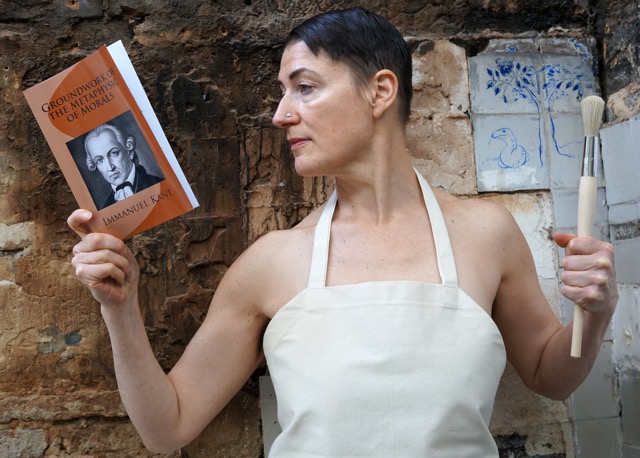 Paradise on Earth: Kant in the Kunsthuis / Hester Reeve, self portrait, 2017

Yes we Kant! is the overall working title for Hester Reeve’s new series of artworks influenced by the study of Immanuel Kant’s ‘Groundwork for the Metaphysics of Morals’ under Dr John Callanan, Kings College, London.

Reeve has become particularly motivated by the fertile paradoxes in the deeper weave of Kant’s rigorous account of the human creature’s innate aptitude for a good will (an aptitude that she links to her term ‘artist substance’) in correspondence to an ultimately unknowable Moral Law, paradoxes which, for the artist-reader, reveal the philosopher’s rare aptitude for imaginative thought-form (something Reeve terms conceptual sculpture) and for allowing such form a subtle priority over logical argument.

For Reeve, conceptual sculpture, the craft of thinking as opposed to the logic of communication and which is dedicated to stimulating the good life on earth, is a complicated labour of love common to certain artists and philosophers alike.

Diagrams on behalf of Artist Substance

With a longstanding interest in the convoluted relationship between art and philosophy, these new works at Kunsthuis SYB re-contextualise the archetypal modus operandi of the artist, painting, as a critical form of thinking in its own right and the painter as a critical form of agency. Side stepping the actual use of paint, Reeve has produced intricate drawings on large stretches of canvas and canvas aprons which reference out dated modes of making by hand in order to suggest a capacity in the human being to become ‘ontologically carved’ as a result of practices of engagement with the world, a process of expression which is nonetheless totally invisible and ‘out of our hands.’ These works are accompanied by ‘unused’ paintbrushes (which Reeve terms ‘will sticks’) into which the artist has fastidiously hand carved decoration as an empowered yet inevitably impossible gesture of recognising the void at the centre of becoming.

The Art-fullness of the Good – Go forth and meddle!

The penultimate work of the series made on site at Kunsthuis SYB stands as a nod to both Kant and the poet Milton whose epic ‘Paradise Lost’ interestingly exerted a huge influence over the philosopher’s moral treatise. Incorporating diagram on canvas, carved paintbrush and photography, this piece playfully pokes its finger into the cultural misogyny inherent in aspects of both men’s ideas, in particular Kant’s outline of genius and Milton’s unquestioning ascription of blond hair and meek servitude to his depiction of Eve.