MAINTAINING EACH OTHER – by Liza Voetman

Liza Voetman (b. 1992) works as an art critic, writer, researcher and teacher. Her current research focuses on the changing conditions of production within the context of the academy and the fiction of independence. Liza has been part of SYB Circles since 2019. On the occasion of the Sybren Hellinga Art Prize 2022, she wrote an impression of the exhibition at Kunsthuis SYB that took place from November 13 to December 4, 2022. 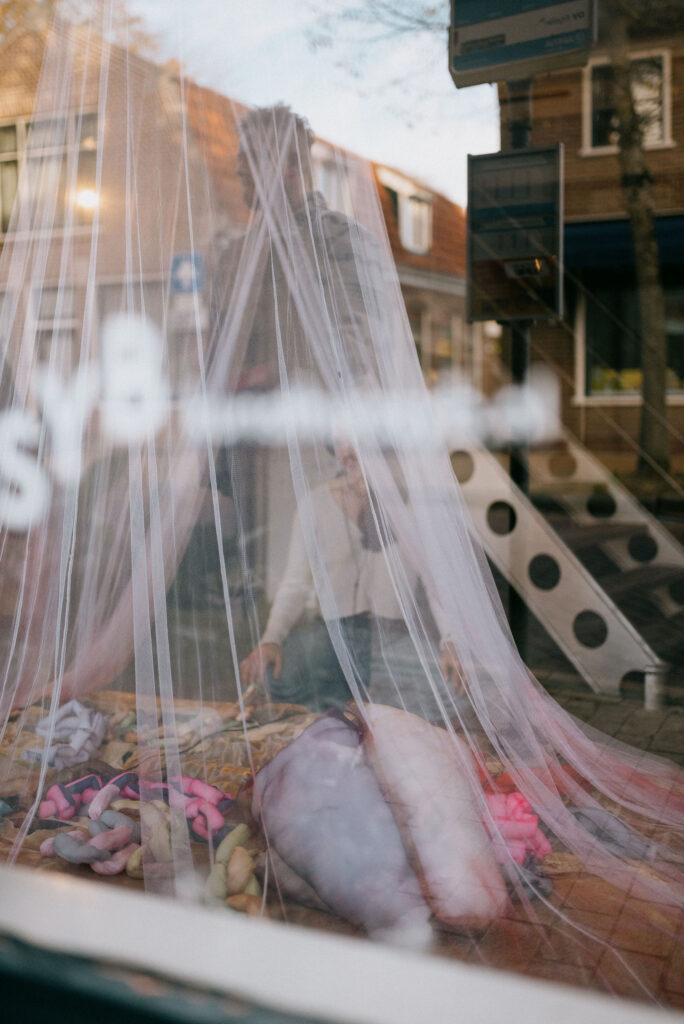 In fact, we gathered for an awards ceremony today. It’s November 13, edition 9 and the winner will be announced in a few minutes. With a glass of champagne in our hand, we look for a place to catch a glimpse of Benjamin, Olivia, Peter, Sarjon and Vita. That’s difficult: SYB’s space is almost full. Friends, family, colleagues and villagers position themselves in crescents one after the other.

I look around. Food is brought in by kitchen Savour from across the street, they are told that they are inspired by the cultural backgrounds of the artists. It strikes me that the five powerful voices present connect remarkably strongly with SYB’s coarse walls, concrete floor, graceful ornaments and picturesque modesty. They carry this space and the exhibition together. In line with Carriers, a title that curator Titus Nouwens (Royal College of Art in London, 2020) carefully bestowed on this group exhibition, they undermine for me the reason of our coming.

“If it is a human thing to do to put something you want, because it’s useful, edible, or beautiful, into a bag […] or whatever you have,”, Nouwens quotes the essay The Carrier Bag Theory of Fiction (1984) by Ursula K. Le Guin among the buzz of excitement, nearly inaudible. “[…] and then take it home […] and then later on you take it out and […] share it  […] and then next day you probably do much the same again-if to do that is human […] than I am a human being after all.” He carries it with him in his pocket and hands it over to us today.

Of course there is the joy, happiness and much love after artist Peter Scherrebeck Hansen (School for New Dance Development, 2022) wins the award a few minutes later. But it’s not really about winning, let alone losing. “Let’s carry each other”, Scherrebeck Hansen smiles in their short speech. It’s about taking care of each other and the earth.

We squat around at a respectful distance. From the outside, the bright sun shines in and illuminates a large ceramic vase. The choreography starts a dialogue between four components: this vase, the environment itself of which we have all become a part, the vibration between the two bodies in front of us, and the song of refuge that they sing in each other’s mouths. Sound resonates from body to body, echoing each other’s voice. It becomes tangible as a vibration in the space, and everyone watches dead silent. Later I leaf through a bundle of text and images on the wall, placed in plastic inserts. “An invitation to be-come vase. To empty, fill, empty, re-fill”, I read on one of the pages. The instructions for use provide information on how to repeat a choreography until we have become a ‘vase’ ourselves.

We humans carry each other and are literally carried by the earth. But do we also carry the earth itself? In asking these questions, I am well aware that a binary separation can continue. As if we are detached from the earth and from the lives of others (!). We wouldn’t have bones without soil. No body, no water. The fact that we do have this is because the Earth actively sustains our existence.[1] How do we deal with the earth? How does it relate to the colonial past? And how can we transform into relationships, into relating, into listening and receiving?

Fe203: A DREAM, the video work by Olivia D’Cruz (Minerva, 2020), brings the rose-red atmosphere of a landscape in South Goa to the space of SYB, her screen carried by a bed of sand. Still without further context, I feel weight. The atmosphere is beautiful, I hear many people here speak out loud, the masks that characters wear as well. To the rhythm of a drum we follow a character in the landscape amidst dry springs and his own produced sound. The character speaks to us. As an activist denouncing the exploitation of his land because of the iron ore mine, it becomes clear: the eighth well has also dried up due to iron ore mining. The work is bittersweet in image and content. As beautifully crafted as the work is, “[…] They don’t stand a chance against the industry that doesn’t care about you, the future generation.”

Just as carefully, the work of Benjamin Francis (Fine Arts ArtEZ BEAR, 2020) engages in a relationship with space and our presence within it. It adapts, reflects and critically addresses its spectators. I move around a formal installation that can be viewed from two sides. In the middle of a basin stands a tall tower. The tower leaks soap and produces bubbles in the basin below. Guard Gates points out the normative mechanism in society. In conversation with Francis we talk about Michel Foucault’s Panopticon, a mechanism that controls us to discipline and correct. We are, perhaps largely, polished or cleaned from the outside to keep pace. I look at the mirroring fountain in front of me. Precisely because of this reflection, the work encourages self-reflection. On the one hand I look at my own display that is washed (clean) by the work. At the same time, due to the process of circulation, the soap will rot. If standardization from invisible authorities comes from the outside, can we clean ourselves from the inside?

In a world full of authoritarian structures, destruction and stacking crisis (among other things because of the binary thinking against which Francis also opposes), Carriers explores how to support each other. Artist Vita Soul Wilmering (De Ateliers, 2021) openly shares how she composes friendships in the performative space of the camera. In the middle of SYB there are only two chairs, both with their own headphones. You have to wait for your turn to watch the video documentary Spiegl on the big screen. It’s finally my turn. In 54 minutes, I follow protagonist Yitschak Spiegl, a Jewish man who fled communist Czechoslovakia in 1988. In a staged setting, Soul Wilmering asks him how he spoke to his wife, as she folds the laundry next to Spiegl. As if she’s trying to recreate the moment with him. She asks him if they talked much, Spiegl and his wife. “Not much,” he replied. “Perhaps we should speak a little less,” Wilmering says assertively.

When I think of a friendship, I think of something or someone that becomes part of you. Perhaps the meeting of Carriers will have that effect. Today, the artists present express the wish to move forward together. From here we can continue to grow together. Being an artist implies staying active on the road, as part of a career, Nouwens says, but also through migration, among other things.

For artist Sarjon Azouz (Bear Artez, 2022), living in the Netherlands as an immigrant and identifying with the word ‘Xeno’, as an alien in a certain society, is a basis for their work. Sarjon and I look at his work together. To the soft, intimate and playful decor in front of us, while I listen to their words. A bed with mosquito net invites you to participate, put headphones on your ears and look at the two screens in the bed. “I’ll took alienation in my lifestyle and I was thinking about this Xeno-identity a lot”, Sarjon mentions. “I think the whole work came from the intention of trying to create that unrealistic setting. I was wondering: is The Xenofeminist Manifesto an over-romanticized manifestation?” This Xeno identity became the Bimbo genetically modified character that I look at on the screens after our conversation. I listen to the words in my ear: “Bimbo’ification is the bio-hack you’re looking for.” In the Bimbo, an alternate extra-human reality, we become ‘hotter’ and ‘more dominant’. As genetically engineered sex workers, they are constantly trying to understand what they carry in a political and social way, and what it means to be modified as Bimbo.

Today you can still take a seat in the bed. Listening to Spiegl. To sounds in South Goa. Watching the reflection of Guard Gates fountain. Clamping your ear close to the ceramic vase, listening to SOUVENIR.  Today Carriers ends, but I believe many with me, you and I who have been here, carry this memory with them. Put it in a bag and take it home, let it resonate from there.

[1] The words of Rolando Vázquez in an earlier conversation